Photos don't do this ring justice, much less screenshots of a video. So, please, visit Japan's Theta Glass Gallery and see the video in motion for a proper view of this stunning "Honeycomb" ring (there are two in the post). Also check out the video for their "Galaxy" ring, pictured below: 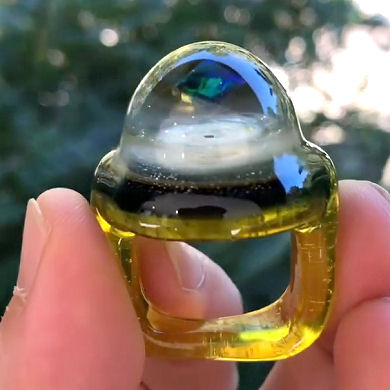 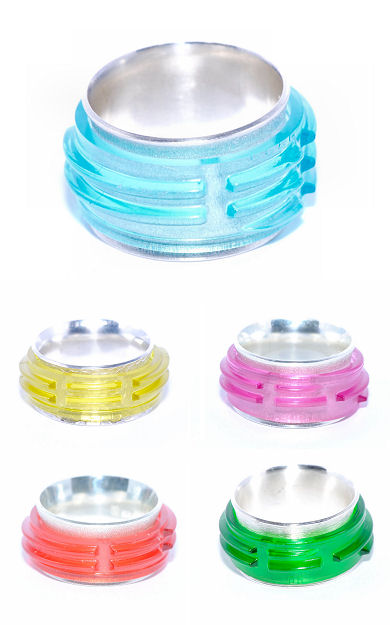 "Twister" rings with repurposed bottles by Maryland's Jowita Allen (whose recycling bin must be a lot more colourful than mine, because just look at those pretty hues). 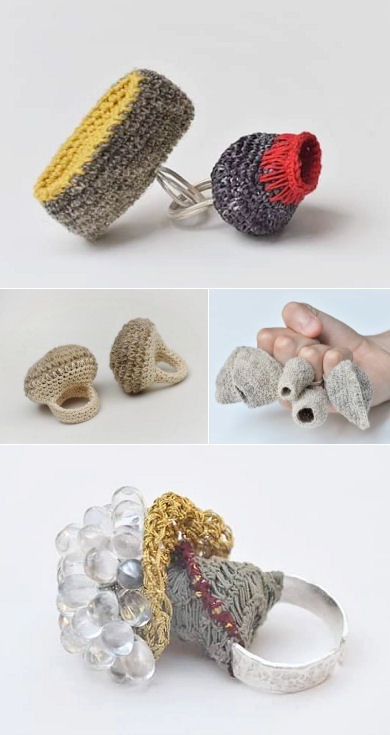 Cozy up to these alpaca wool rings by Argentina's Adriana Gómez.

See the squeeze? These iron and balloon rings are a commentary on the housing problem in Brazil, where — like in many places around the world — those with money are forcing those without to move further and further outside the city. To see more, including non-rings from the same series, visit Brazilian jeweller, architect and urban planner Joana Gabos.

Massachusetts-based Michelle Yun uses "geometry as her ruler" while creating work that "embracess the essence of traditional Korean art." 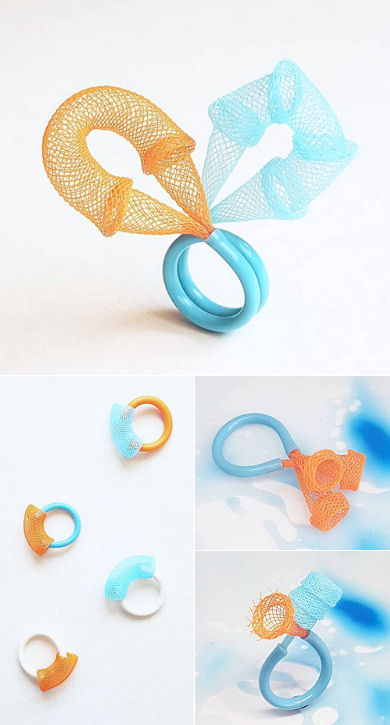 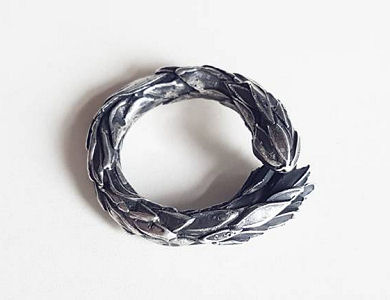 ...who actually works mostly with metal. Visit her gallery to see more! 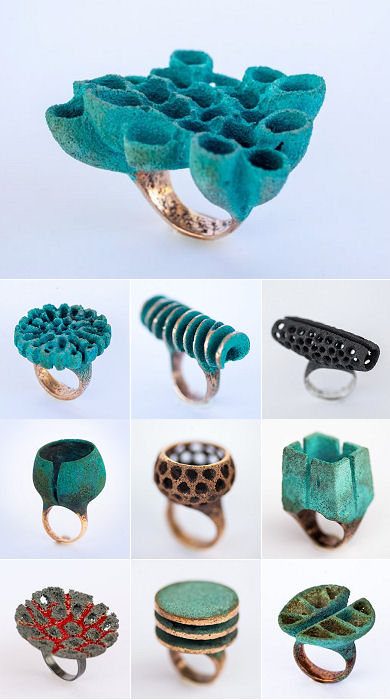 Italy's Lorenzo Pepe has such a distinct style that even with all these different shapes, each ring is so clearly his.

Transparent — but most decidedly not invisible — glass creations by Poland's Joanna Muzyka Studio. 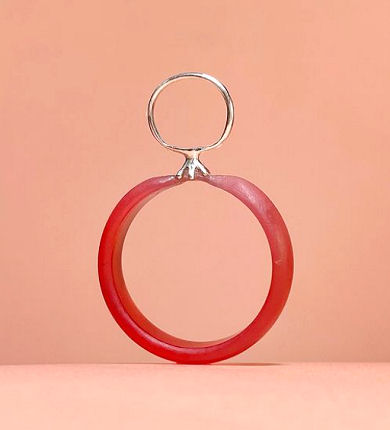 It's a solitaire solitaire, aka the "Half Turn" ring. 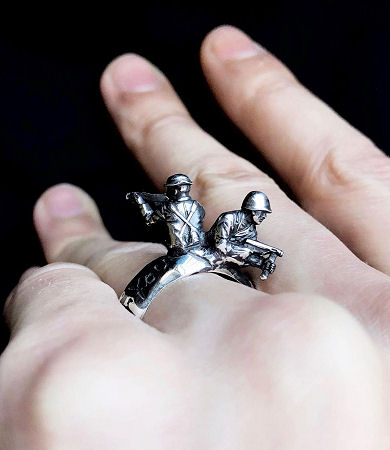 For more, including the "Love Wars" series of rings, visit Japan's Sano Teruyuki.

Snakeskin ceramic? That might be a first here. I love the textures and glazes on these rings by the UK's Hannah Burroughs, whose main focus is actually animal sculptures (and pretty great ones, at that).

I guess these were cement to be: rings in cement, iron oxide, bronze powder and aquamarines by Romania's MusiDesign (Alexandrina Remescu).

Wasanbon, yatsuhashi, mizuyōkan — those are just some of the delectable motifs used by Japan's Desicco, who miniaturizes Kyoto confections and turns them into wearable art.

Quick, someone invite me to an opening at an art gallery so I can wear something by Russia's Koókoozi (Anna Seredova). 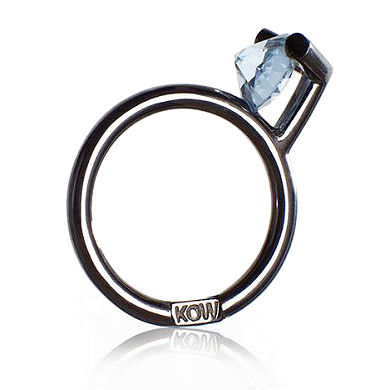 A side of the solitaire we don't often see. 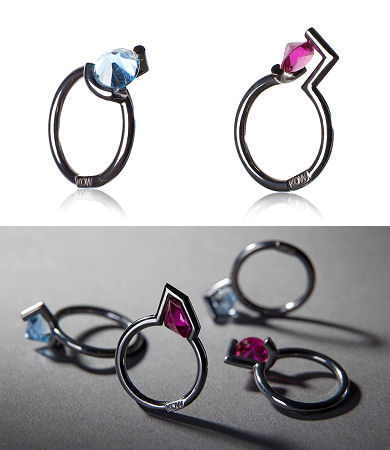 All rings above — and their playful settings — by the Czech Republic's kow (Jaroslav Kučera).

If you're supposed to accessorize for the job you want (that's how the saying goes, right?) and you have your sights set on "rock star," just turn to Australian designer Sumer Sayan and his label, Harlin Jones. 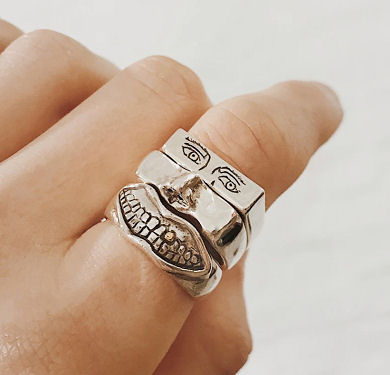 "The Golden Geezer," "The Schnozzer" and "The Thin Crying Eyes" combine in this so-called "mesmerising monstrosity" of a stacking ring set by the UK's Rat Betty (Millie Hand)... 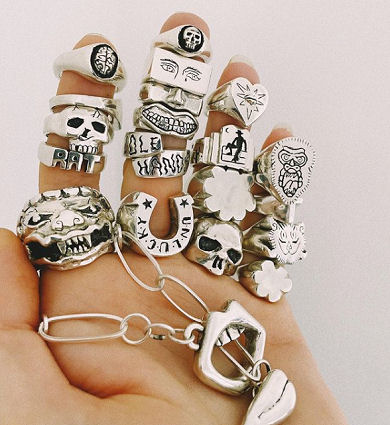 ...who makes "the type of pieces she'd always wanted to wear and [had] never been able to find." 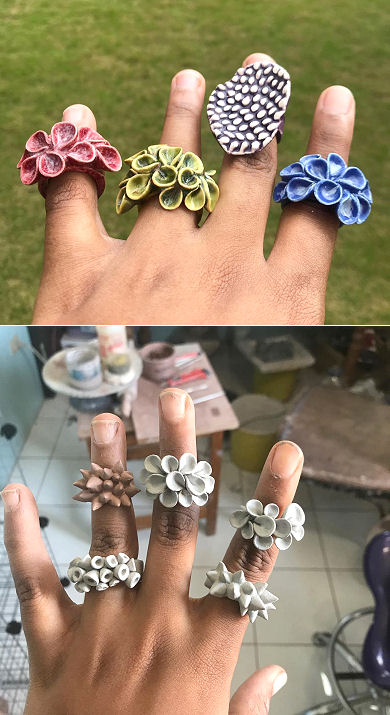 Brooklyn-based Japanese artist Tomoya Nakagawa blurs what line there is between nail art and jewellery.

These rings from Poland's Manufaktura Porcelany feature clean lines and (often) monotone colours that aren't typical of the porcelain rings I usually see. Check them out not just for their rings but also for their cool cups and mugs!

I love how some of these rings look like arenas — if they were standing on end and filled with diamonds instead of spectators. For more, visit Japan's Masahiro Nakata, who's inspired by "structure... and repetitive pattern."

Welcome to the neighbourhood. It's a little blackened, a little Bauhaus and all by Israel's Etay Malka. 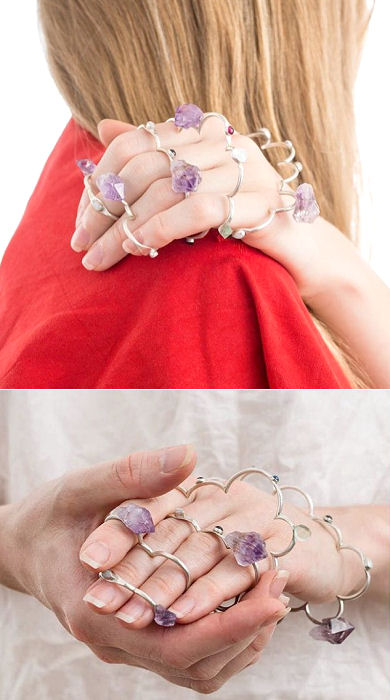 Every cloud may have a silver lining but the really good ones are adorned with chunks of raw amethyst. 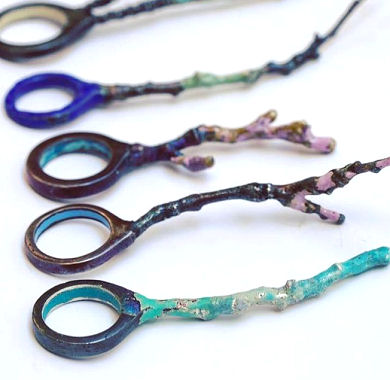 All rings above by Israel's Sofi Goldberg.