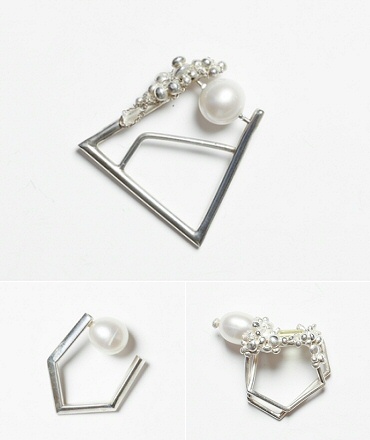 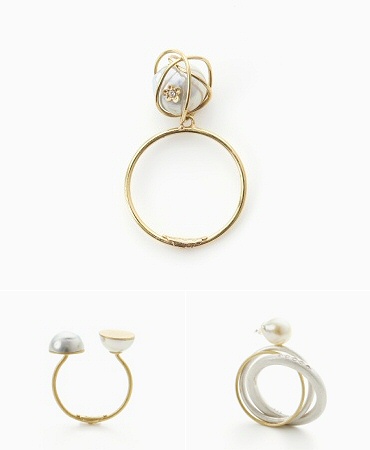 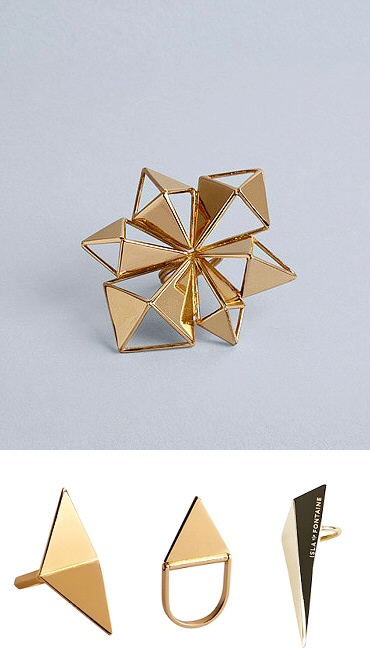 Kite deficiency is an issue that affects us all. Remedy that with this six-kite ring from Italy's Isla Fontaine, then check out her site for more shiny metal in geometric designs.

I'm showing you the money!...rings (and some bangles) by French jeweller Julie Pasquet of Bijoux de Famille, who offers a trove of colour, crystals and cash. (Side note: Cuba Gooding, Jr. shouted those famous words in 1996 — almost twenty years ago! And he was on MacGyver just five years before that! Is time even time??)

Too bad porcelain is so fragile. Imagine if entire cities could be made of glazed porcelain buildings, with ceramic cars on clay-tiled streets — it'd be like living in a fairy tale. In the real world, at least we can have our porcelain jewellery, like these cute rings from Denmark's Silly Rice. 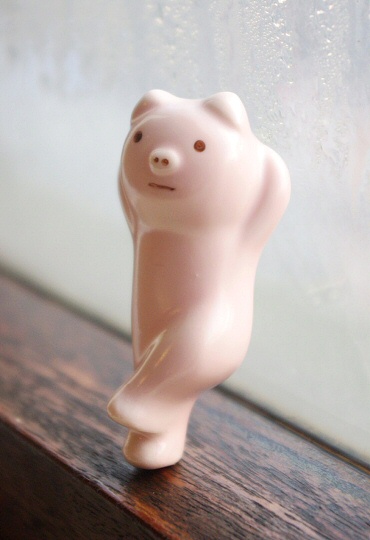 (Ok, this one's a pin, but how could I resist posting a pig in repose? Impossible.) 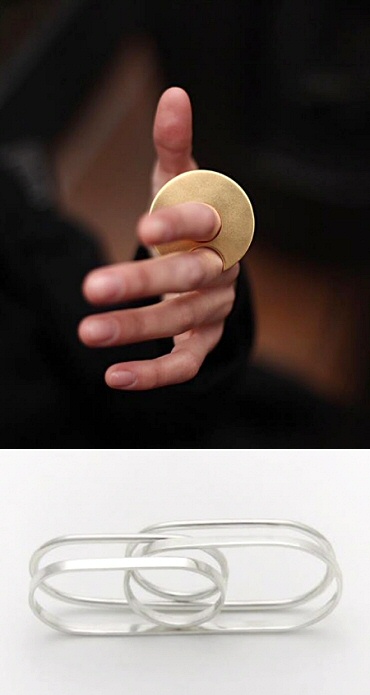 Georgia-the-country design house Matériel is better known for its clothing, but its jewellery follows the same aesthetic: tending toward minimalist yet with interesting details. 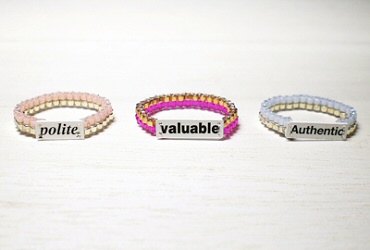 Those words, that typeface — ring a bell? 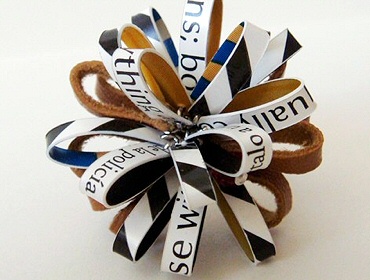 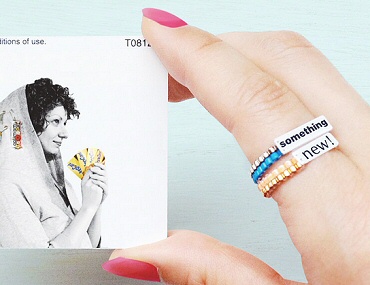 If you're a New York commuter, you know that these are recycled MetroCards! Check out Japanese jeweller Chankae (Kae Ichihashi) for more. 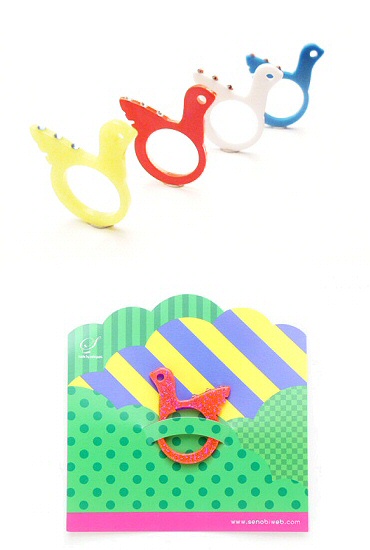 On the off chance any of you grew up taking piano lessons in Yokohama, this one's for you. These vivid bird rings were musically inspired — but not in the way most would think. They're an homage to the bird on the Japanese covers of Beyer Piano Books! 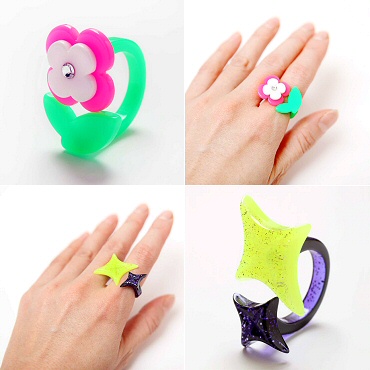 For fun, colour and the occasional balloon, check out Japan's Sekiyumi.

Mirror, mirror, on the wall, if only you were really small, and made of acrylic, you could've been turned into a ring by Greek jeweller George Giannoutsos. 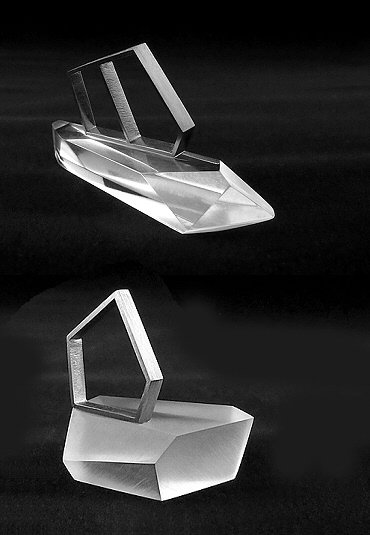 Do I wear these or do I board them and sail off into the cold Arctic? 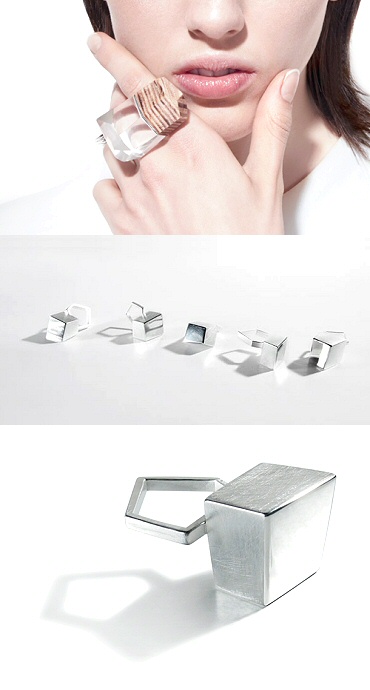 Visit Poland's ID.FOR.FUN (as in "Idea.Form.Function") for sleek industrial jewellery and objects in metal and clear plexiglas.

When you think "armour," you probably envision medieval European armour (unless, maybe, you happened to see last week's samurai ring just now). Well, here's Japan's Lacquersmith Lynx with their — wait for it — samurai armour. The first ring is actually two pieces, consisting of the mask and helmet; also shown is the breastplate ring. Each is handmade using materials and techniques consistent with the samurai period — maybe that should be periods, plural, since it spans centuries!

Mathematical. That's what I thought when I saw the work of Australia's Melissa Cameron, and that's before I saw that her site had lines like, "How many different objects can you create from one pattern?" and "I accept and use the tenets of Cartesian geometry without question in order to create my work." The first ring above is called "Controlled Explosion," which seems like an apt title for many of her pieces. This is another case where the images here don't do justice to the entire body of work, so go check it out!

Reykjavik-based Lithuanian jeweller Benas Staskauskas, whose "main focus is the use of synthetic materials combined with organic and natural materials," creates rings that look as though they were plucked from remote landscapes untouched by humans. He works with such things as resin, gold, dolphin teeth and volcanic ash. 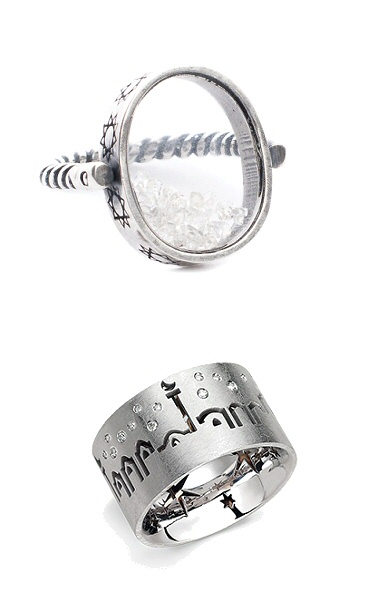 Luckily, this is the closest thing to snow I've seen this season. Up top is a "shake" ring by California's Torchlight (Louisa Kimble); filled with little Herkimers, it's like having a wearable snow globe, if snow globes had crystals in lieu of snow and panes in lieu of globes. Below it is Italian jeweller Dante Di Lilla's ring featuring the skyline of Medina, Saudi Arabia. I'm guessing Medina doesn't see much snow but those crystals read more like flakes than stars to me!

A samurai, some cats and a well-coiffed Day of the Dead skull walk into a bar... and I forget the punchline because I was too busy ogling the goods over at Thailand's Good After Nine.

Isn't this "masculine men's jewellery" rather pretty? UK designer Joseph Farrow based these rings on deconstructed found objects; shown above are the "hinge" and "chain" rings. The finish on each stainless steel piece is manipulated so that no two have the exact same colouring. 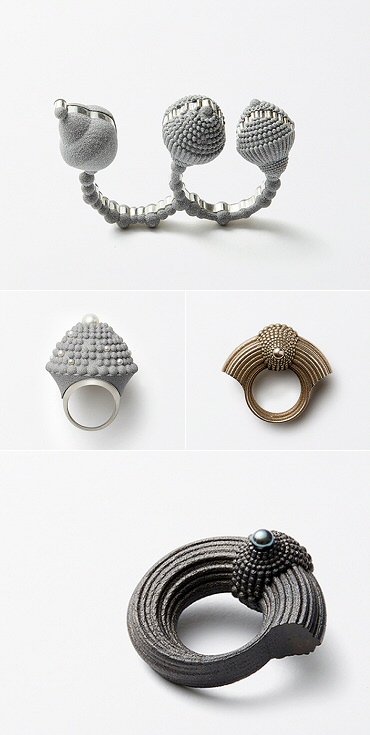 Happy New Year! Let's kick off 2015 with Singapore native Ruiyin Lin, whose collection is "both a tribute to the past and a prelude to the future." She combines traditional forms and craftsmanship with "digital manufacturing methods" — in other words, 3D printing.