Happy candy-reaping day, everyone! Get in the mood with a visit to England's Phoebe Sherwood-Moore. 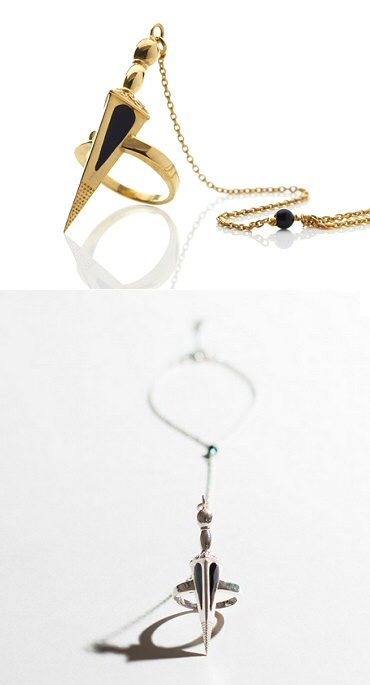 Not to be all dramatic but... Is this a dagger which I see before me? Yes, it's the "Tulsi" dagger ring/bracelet by the UK's Lulu Walton. 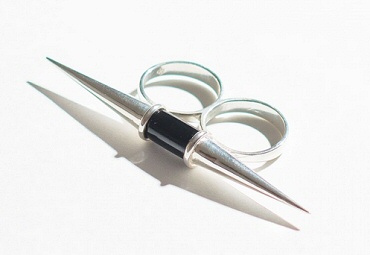 Above: her super spikey "Sudha" double ring (to guard against toil and trouble, perhaps).

Jess Taylor gets her wires crossed, intentionally. Using silver and steel wires, the UK jeweller "seek[s] to capture and convey light, movement and a tactile quality that promotes the sensory feeling of the jewellery." 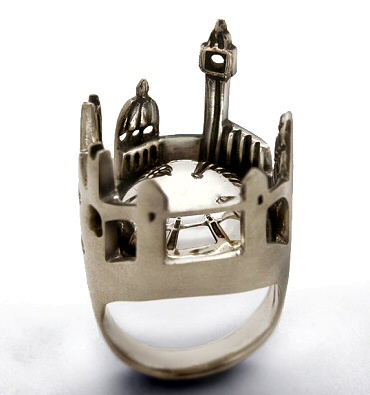 I like rings that demand to be viewed from many angles — like this London ring, which UK jeweller Agnieszka Maksymiuk designed so that the buildings would reflect in the silver disc in the middle. Check out her gallery for more pieces, many of which are reminiscent of 3D chalk art. 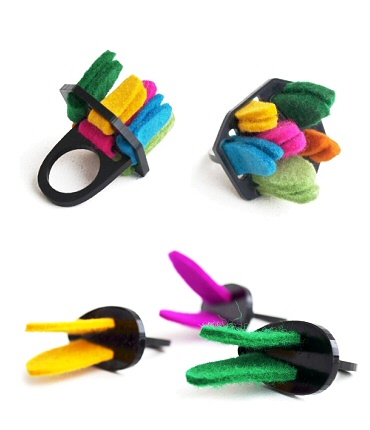 I like that something so fuzzy and touchable is called "felt." It's like flowers or perfume being called "smelt." Above: felt and acrylic rings by Peru's Vaçide Erda Zimić. 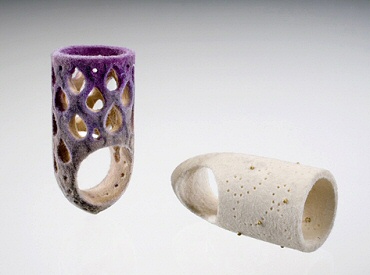 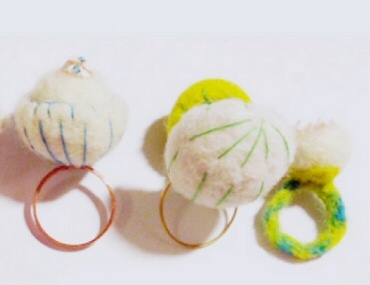 More felt from the UK's UDiii. 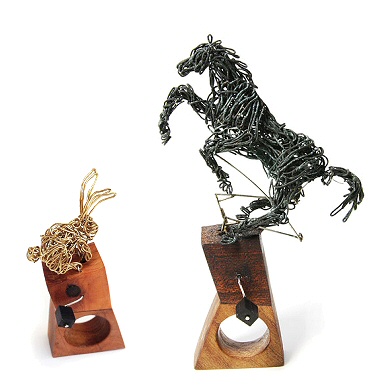 While you're admiring the sculptural wirework, don't overlook a certain important detail: the little cranks. These rings are kinetic! 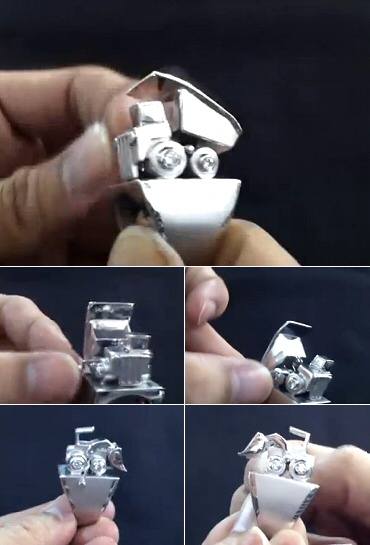 Visit London-based Thai jeweller Pasu Roungpanyaroj to view all the rings in action (the videos look better than my feeble screengrabs), including shiny zodiac critters not shown here.

Roses are red
Some rings are, too
Line #2 should be
Violets are blue 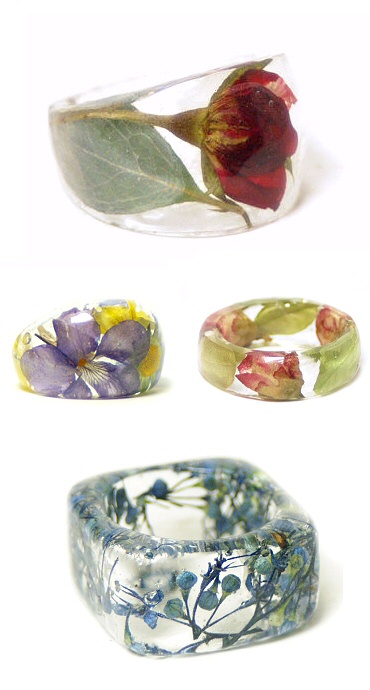 Roses are red
Violets are blue
Wait, aren't they purple?
Either you have deuteranomaly or these hues are askew

The mixture of smooth and eroded parts (particularly in the middle set) makes these rings look like relics from a bygone but advanced-by-our-standards society. To see more, visit Rhode Island's Farah Abdelhamid. 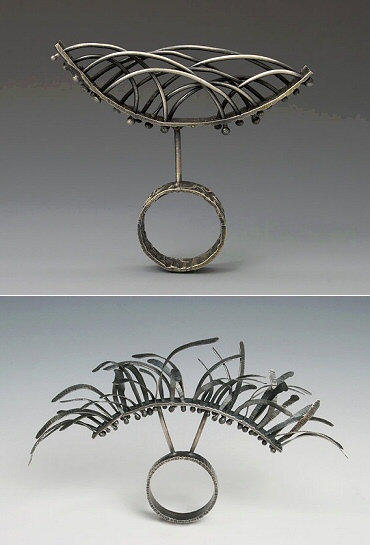 These rings made me realize that I'd never considered the difference between "arced" and "arched." I think an arch can be somewhat pointed, whereas an arc is always a smooth curve (which is why you're more likely to say "arched eyebrow" rather than "arced"). Are you still awake? If so, check out Colorado's Nikki Nation for the arc series and more. 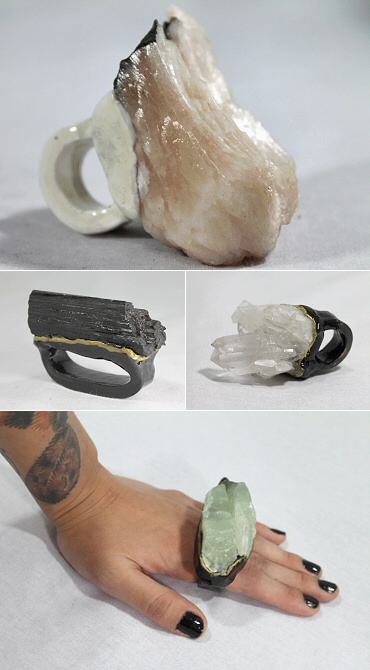 These awesome chunks of raw crystal brought to you by Los Angeles' Cat Apolinar.

Inspired by tradition but created with modern tech, this ring by Rhode Island-based Alex Ju is best explained in her own words:

Traditional signet rings were jewelry reserved for the domain of men. Pearl necklaces have long served as traditional female jewelry, and this signet ring with two interchangeable signets consider this juxtaopsition. Abstracting pearls, I considered the form of the hexagon, emulating the aragonite platelets that deposit in the layers of nacre forming a pearl. Modeling my signets in Rhino, I had them 3D printed from ABS plastic, finding the layer-based deposition of the 3D printer fitting for a pearl-inspired piece. Round cultured pearls complete the signets, which fit securely into a faceted brass construction.

Metaphor overload: a watch ring with a face designed to fade over time. Visit German designer Frieda Bellmann to see photos of the design process and to read more about the concept. 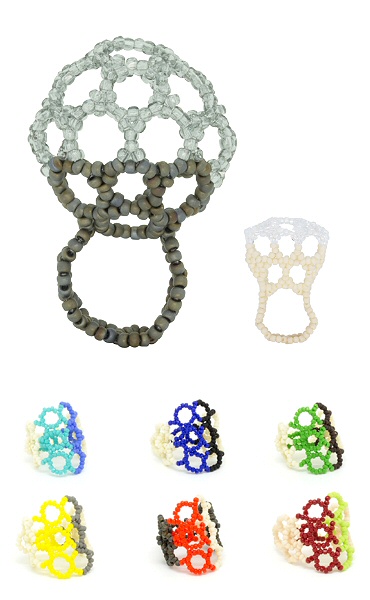 I should've known that as soon as I made my recent admission regarding beaded rings, I'd start seeing more and more that I liked — like these ones, by Japan's Penta, a collaboration between designer Fuji Tate P and Toho Beads. Check out the collection for an assortment of glass bead structures, including wild eyewear and a tribute to Alexander McQueen. 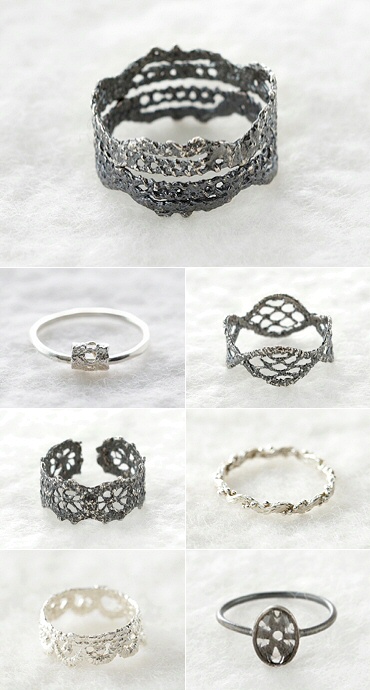 It's Canadian Thanksgiving — but I'll spare you the turkey rings. Instead, here are some quietly pretty, lacey silver rings by South Korea's Jigum (JungEun Yo). 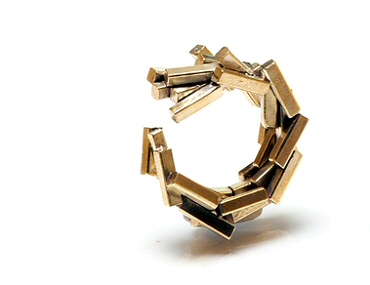 With two Os and a zero, "October 10" is one of the roundest-looking dates on the calendar. Let's disturb that sense of closure with some unclosed (not to be confused with open) circle rings. Above: "Lasting Impression," inspired by Van Gogh's "Starry Night," by Puerto Rican jeweller Carla Carballo. 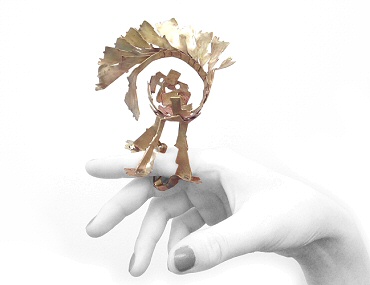 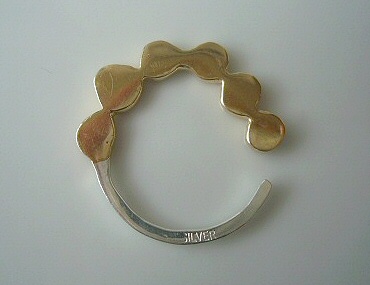 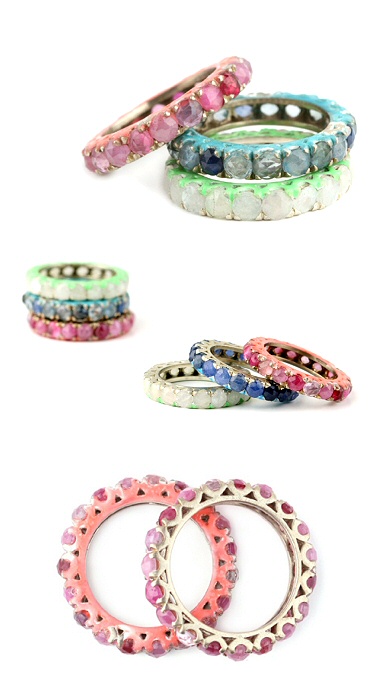 A little coloured varnish completely transforms the vibe of these eternity rings. It's like the jewellery equivalent of a purple streak in your hair! For lots of pieces that have a little touch of the unordinary, check out Italy's Maschio Gioielli. 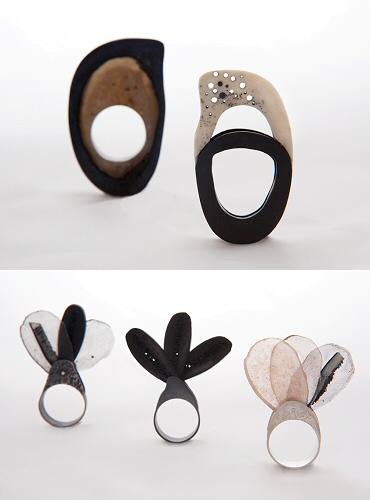 Etheral beauties by Scottish jeweller Robyn J McLean, who "is very much inspired by the relationship between the mind and the body, using the concept and aesthetic of the inkblot or Rorschach test to represent cerebral activity and bone, horn and granulation to convey the body." Which... makes them not ethereal but rather corporeal. But in a really ethereal way. 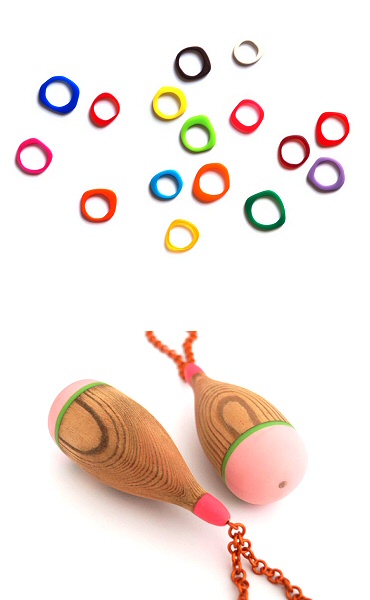 The hardest part of writing this blog is having to pass over a jeweller whose work really blows me away — because s/he doesn't make rings. Luckily, Sweden's Helena Johansson Lindell did have one group of colourful bands (above, top) so I could point you to the rest of her interesting portfolio (like the piece pictured above, bottom). Hooray for technicalities! 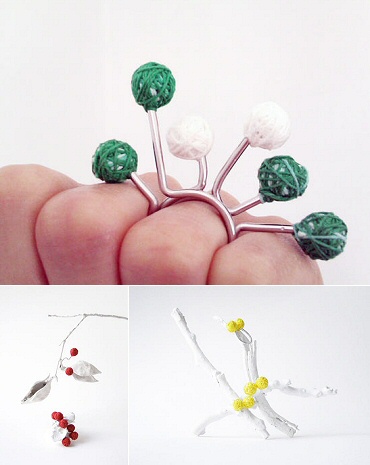 I wonder if anyone's ever been told, "What a yarn!", misheard it for "What a yawn!" (the right accent could do it), and been unintentionally insulted? Definitely not a yawn are these yarn-ball rings in cotton and aluminum by Italy's Camilla Marinoni.

"Larger Than Life" is just one of Aric Verrastro's collections but the name could apply to his whole portfolio. Don't miss the Indiana artist's wild, creative pieces inspired by gender issues, as well as his series inspired by urban renewal in his hometown of Buffalo, New York. Pictured are rings from "Extensions." 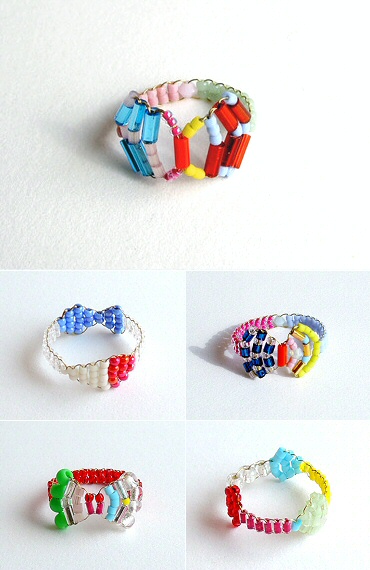 While I can appreciate beaded rings, truth be told, the designs are often not to my personal taste. That's not the case with these ones, though! I like the bright, fresh colours and asymmetrical patterns of these rings by Japan's Toribanana (that's "bird banana," aka Miho Nishitani), three of which are from her "butterfly" collection — I'm sure you can guess which three.

Check her site for non-beaded work, too.

It's the first of the month, which means you're suppose to have said "rabbit, rabbit" when you woke up, to ensure good luck for the next 31 days. If you didn't, there's still time to knock on wood with a rabbit's foot. Maybe wearing a rabbit's head would help, too. 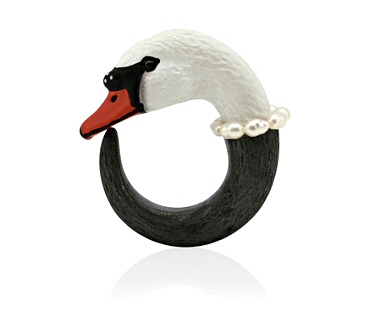 All rings above by Denmark's Nord by Thomsen (Mette Nordby Thomsen).