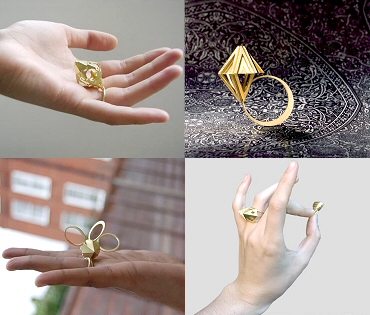 It's so true what they say: Leap Day just isn't Leap Day without rings in diamond-cut gold and crystal. Above, Germany's Janine Arnold with pieces she describes as architectural miniatures for the body.

Meanwhile, below, these rings from the Netherlands' Hester Vonk Noordegraaf are like miniature chandeliers for the body. 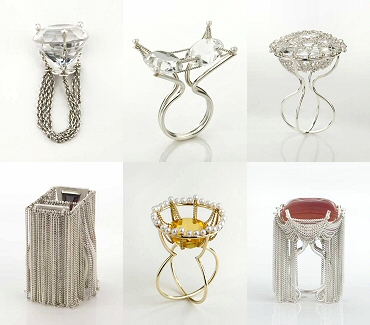 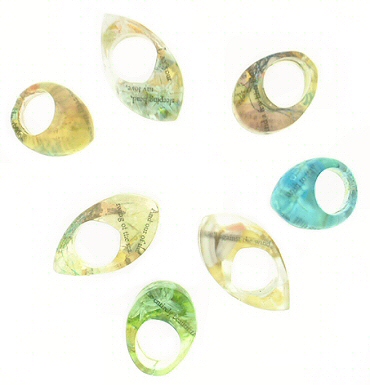 These rings have a lot going on yet, at the same time, are like whispers, barely there. (I accidentally typed "whiskers" at first — but I suppose that would work, too.) UK jeweller Daisy Dunlop describes her work as "contemporary hand cast resin jewellery in soft irregular shapes with poetry, petals, plants, collages, silks, precious metals and icons." And who I am to argue with that thorough assessment? 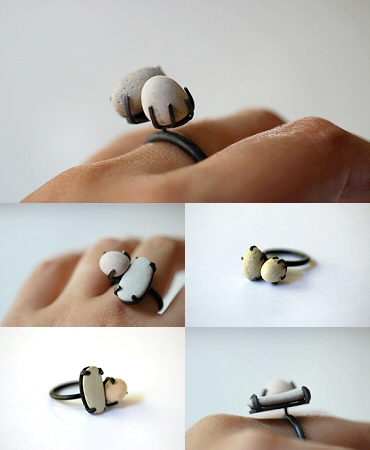 I like the organic shapes and measured simplicity of Djurdjica Kesic's jewellery. In these pebble rings, the Australian artist strikes just the right balance of milk chocolate and crispy candy coating. Wait. Sorry. I'm getting them confused with Cadbury Mini Eggs again. The rings are tasty pretty, though. (By the way, if you're in the US, your "Cadbury" chocolate is actually from Hershey's, under license. If you're a fan, definitely get your hands on the Canadian or UK versions for maximum Mini deliciousness.) 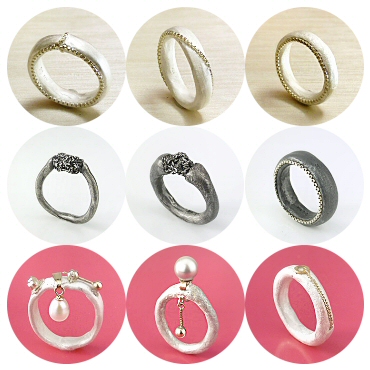 I apologize for the violently graphic nature of the above image. As you progress through the artist's gallery, what at first looks like an interesting meeting of band and box chain slowly becomes a scene of carnage as you realize it's an entire necklace — notice the clasps and findings in the bottom row — that's slowly being eaten. Eaten alive! Rings by Germany's Tanja Emmert. Warning: she also has one that's eating an earring.

Below, some more chain rings (and other pieces) from London- based Croatian designer Nina Bukvic. 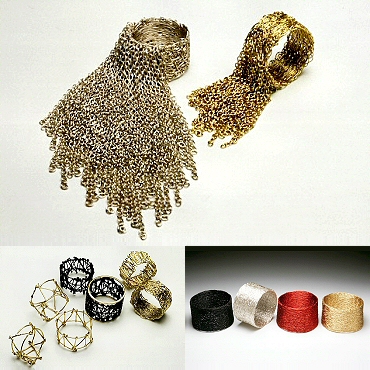 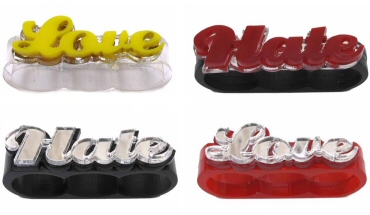 As far as statement pieces go, you'd be hard-pressed to get more literal or definitive than this! Acrylic three-finger rings from Los Angeles designer Melody Ehsani, US$25, customizable to your preferred text and colour combo. 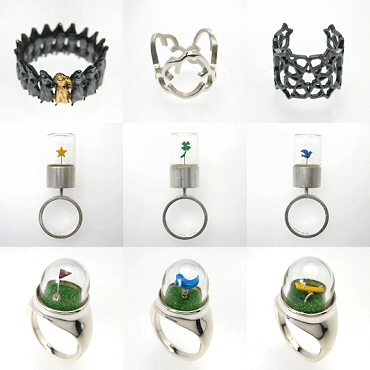 I've seen rings depicting a gaggle of geese and even a warren of rabbits but this superfluity of nuns is a definite first! Above, top row: "sister" ring, cloud ring and unity ring, all silver or oxidized silver (plus one golden nun). Middle row: rings from the "grasp" series allow you to grasp dreams (the star), luck and peace. Bottom row: the "playground" series captures see-saws, spring chairs and a scene from a more adult playground, a golf course. All this playful metalwork brought to us by Cloud Creator's Phillip Tanaka, who was born in Australia but now resides in Japan; plenty more to see on his site! 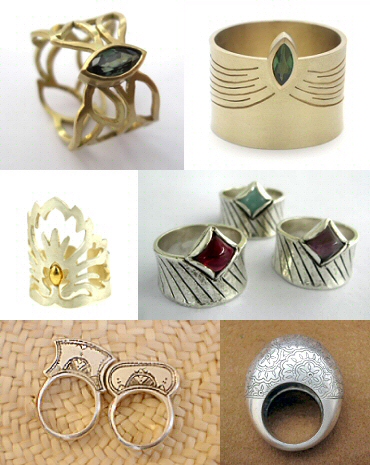 Am I allowed to feel an Indian/North African vibe when they're thousands of miles apart? Does that make as much sense as getting a Brazilian/Senegalese vibe? While I ponder that, please ponder these rings. Top row: turban rings by UK jeweller Shivani Patel. Middle row: gold ring by London's Jana Reinhardt and silver rings from Vancouver's Naomi Levitin. Bottom row: "oaz" rings from France's Ombre Claire (left) and "swelring" from the "Mehndi" collection of Japan's Super Silversmith. 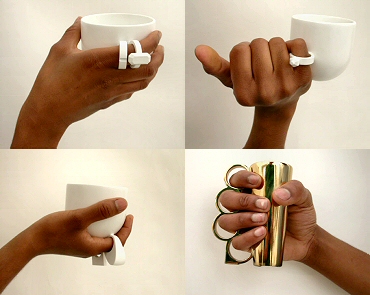 I always perk up when I see cup rings; if I were much of a coffee drinker, it'd be downright Pavlovian. This particular series is from UK artist Simone Brewster, who was inspired not by her surname but by 1975's The Philosophy of Andy Warhol. The knuckleduster piece, by the way, is a shot glass. 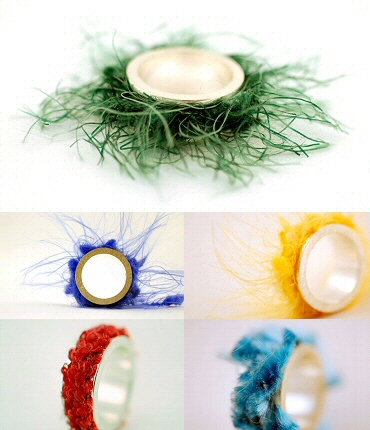 These bright, fuzzy rings should put a smile on my face but I can't shake the uneasy feeling that Oscar, Elmo, Big Bird and the Cookie Monster are walking around somewhere, naked and shivering. Colour and texture from Dutch artist Jolanda Kleiss. Below, a couple more of her fresh rings: 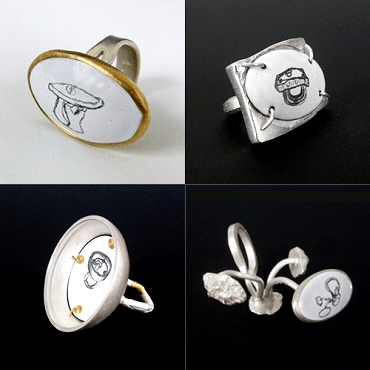 Like that one person we all know, these rings' favourite subject is themselves. Made of silver and enamel and adorned with self- reflective images, they're from Virginian artist Gabriel Craig's new "narcissist" series.

Below, Dutch jeweller Peggy Bannenberg also works with silver and enamel (and gold and eggshell) in these pieces with interesting grid overlays. 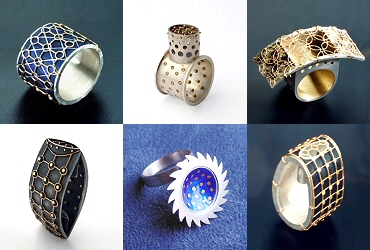 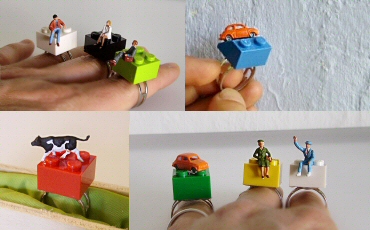 Weekend quickie: more Lego rings, only this time, the toy bricks are secondary to the miniature world they inhabit. From Italy's Guendalina. 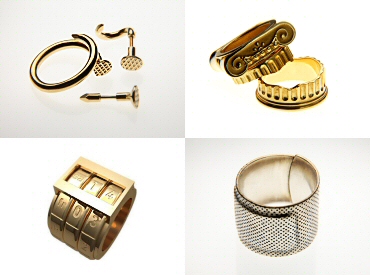 Russia's Open! Design draws inspiration from everyday objects that aren't traditionally "pretty," like bent nails, bandages and... broken Ionic columns. Hmm. On second thought, maybe the theme here is "accidents." On the bottom left is a calendar ring that lets you set a date so you won't forget any upcoming appointments. 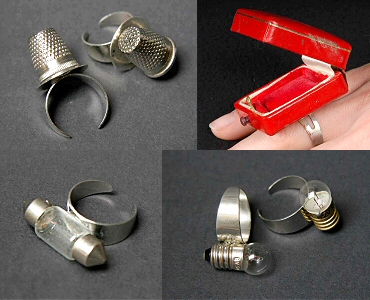 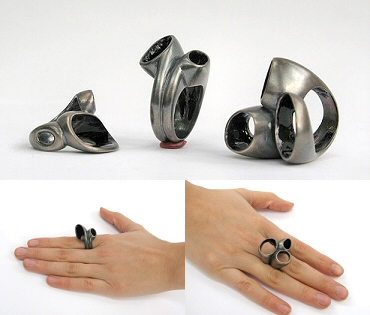 The heart may get all the glory but it is nothing without the vascular system that keeps it going. Ferndale, Michigan's Lana Rahme pays tribute to those hard-working tubes with her set of cast silver "vascular" rings.